Spatial plan is one of the most important document for land buyers. In this article, we will explain:

What is spatial plan

Spatial plan comprise, together with principles of spatial development and regulation plan, spatial planning documentation. Principles of spatial development is a document of regional significance and is therefore quite general without much use if you want to examine a land plot. Regulation plan is for particular area of the municipality and contains more detailed information than spatial plan. Villages do not usually have regulation plans but if they do, you need to check whether it could affect you. We will talk about regulation plan in the end of this article.
Spatial plan sets out elementary concept of aerial development and structure of the municipality. It also determines buildable and non-buildable areas (including the type of permitted usage of the land in the area) and conception of public infrastructure. The spatial plan usually consists of text part (verdict and justification) and drawings. For land examination, verdict (výrok) and the main drawing (hlavní výkres) are essential.

Why it is important

As mentioned already above, spatial plan tells you how you can use your land or how the area around you can be used now or in the future.(e.g. new major road or future waste water plant facility). Spatial plan is a binding document, the Building Office must not issue a building permit, which would be in contradiction with spatial plan.

Spatial plan issue and amendment is subject to official procedures and as such they are usually matter of several months or years even. Several authorities have consultation rights to the spatial plan and can influence its content. Bear this in mind if you consider buying a land which usage is dependent on spatial plan amendment. It is always a risk and shall be reflected by lower price. You should also beware of impending spatial plan amendment that me adversely affect your selected land (in such cases, the seller would not inform you as likely as if the change is positive).

Where you find it

How to use it

We explained in the introduction that spatial consists of text part and drawings.  For land examination, verdict (výrok) and the main drawing (hlavní výkres) are essential. In the picture above, we see the main drawing of Porici nad Sazavou’s spatial plan. The municipality is not too big (around 1300 permanent inhabitants) and includes variety of area types. That is suitable for our demonstration.

So in our example, we found a nice land via an advertisement, the land is situated in Porici nad Sazavou. We know the street and we located the land in the map. Either in mapy.cz or in the land cadastre, we identified the plot number (see this article to find out how we did it).

For easier orientation in the main drawing map, determine a couple of landmarks that you can quite easily identify in the spatial plan drawing as well as normal map. In Porici nad Sazavou, the landmarks could be for example river (curved green line called Sazava), railway (there are two – the huge purple line on the left is the planned high velocity railway and then there is a smaller purple curved line in the middle that is the current railway), major road (grey line with dots on the right of the grey area) or cross arena (big orange area in the middle).

We could see in the map that our land is not far from the cross arena and from the railway. The land was located in the corner of a triangle of built over plots. Therefore, it is now not very difficult to find it in the spatial plan main drawing. We can also verify the plot number as it is written in this spatial plan (which is not a rule). You can also see that the area, in which our land is located, is labeled as Z04 and BI. 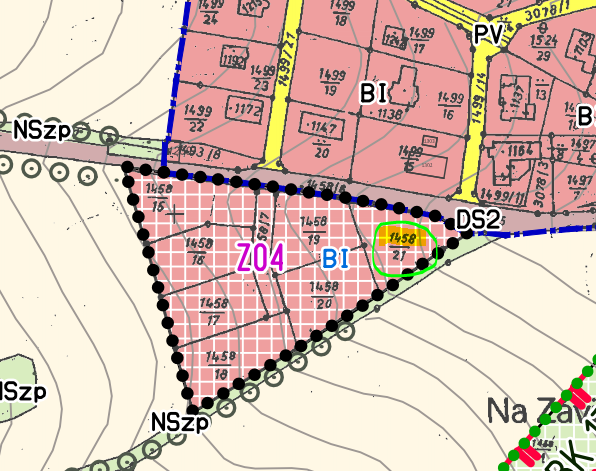 You can find out the meaning of Z04 and BI both in the main drawing’s legend and in the text part of the spatial plan. In the legend, you can see that BI is housing in family houses – urban type and that hatched area is a development area.

Before we go to the text part of spatial plan to find out what we can build on the plot, we want to draw your attention to other areas in the land proximity. We have already mentioned the cross arena, railway, major road and river. There is also an industrial zone (grey area). We talk about this more in the article Location – 10 Noise and pollution sources to watch out for. In our point of view, for our plot here, the biggest issue might be the cross arena and the railway. The major road is quite far and the river is quite below the plot (you can see the contour lines in the drawing or you can use mapy.cz turistic mode, we talked about this in the article How to use the Czech Cadastre of Real Estate when checking a land).

LandCheck.cz is independent real estate consultancy helping you find the right land for your new house.

Disclaimer: LandCheck.cz does not provide legal services but cooperates permanently with a law firm.